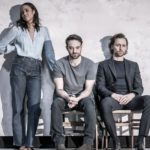 The artful 1978 adultery drama, which uses reverse chronology to explore the seven-year evolution of a troubled love triangle between a publisher, his art gallery curator wife and his best friend, a literary agent, is considered among the Nobel Prize-winning playwright’s major works, directly inspired by his own clandestine extramarital affair.

The production is directed by Jamie Lloyd and in London served as the culmination of his company’s acclaimed Pinter at the Pinter season, staged in the West End theater that bears the playwright’s name.

“Watching this remarkable cast bring new life to Harold Pinter’s greatest work has been one of the most gratifying and exciting experiences of my life in the theater,” Lloyd said Thursday in a statement. “I am thrilled that American audiences will have the chance to witness their stunning performances.”

The London creative team of set and costume designer Soutra Gilmour, lighting designer Jon Clark and composer and sound designers Ben and Max Ringham remain on board the production.

Hiddleston’s extensive London theater credits include Hamlet, Coriolanus, Ivanov, Othello, Cymbelineand The Changeling. He was most recently seen onscreen as god of mischief Loki in Avengers: Endgame, and will reprise that role in a TV series being developed by Marvel for Disney+.

Ashton appeared opposite Jake Gyllenhaal in Netflix’s Velvet Buzzsaw, while Cox is best known for the title role on Daredevil, also from Netflix. He made his New York stage debut in Manhattan Theatre Club’s 2016 off-Broadway production of the Nick Payne play Incognito.

Betrayal has had a starry history on Broadway. It premiered in 1980 in a Peter Hall production with Roy Scheider, Blythe Danner and Raul Julia. David Leveaux directed a 2000 revival that starred John Slattery, Juliette Binoche and Liev Schreiber; and the play returned in a 2013 blockbuster production directed by Mike Nichols and starring Daniel Craig, Rachel Weisz and Rafe Spall.