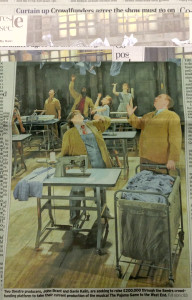 Gavin Kalin Productions are proud to announce that they are the first theatre producers along with Smith-Brant Theatricals to successfully raise capital for a West End production partially through the equity crowdfunding platform Seedrs.

With over 200 investors ranging in their investment from £10 to £25,000 the Seedrs raise contributed to 14% of the total capitalisation for The Pajama Game.

Stage One, the charity that supports new UK theatre producers and productions, awarded Gavin Kalin £30,000 to co-produce the West End transfer of the critically-acclaimed Young Vic production of A Doll’s House. Gavin Kalin Productions will co-produce alongside the Young Vic, Mark Rubinstein and Neil Laidlaw. The production will open at the Duke of York’s Theatre in August 2013 and will see Hattie Morahan reprising her award-winning role of Nora Helmer with Dominic Rowan playing Torvald.

Gavin commented “Within seven months I have gone from attending the Stage One New Producer Course to being awarded the Start-up Fund and I could not be happier. Stage One has helped me realise my potential for working as a theatre producer and I thank everyone involved in this fantastic organisation for their continued support and guidance.”

Directed by Carrie Cracknell and adapted by the Olivier award-winning playwright Simon Stephens, A Doll’s House premiered at the Young Vic in July 2012 and returned in March this year when it celebrated a second sell-out run.