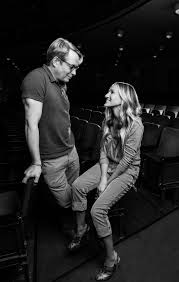 Husband-and-wife showbiz duo Matthew Broderick and Sarah Jessica Parker will return to Broadway together, headlining a revival of Neil Simon’s comedy Plaza Suite. John Benjamin Hickey will direct the production, which will first play the Emerson Colonial Theatre in Boston (an early home to the original 1968 staging) in February 5–22, 2020, before beginning previews at Broadway’s Hudson Theatre March 13. Opening night is set for April 13.

The two previously appeared on Broadway together in the 1995 revival of How to Succeed in Business Without Really Trying, when Parker (Sex and the City, Divorce) took over for Megan Mullally as Rosemary Pillkington. Though they did not star in it together, the two share another stage credit: A.R. Gurney’s Sylvia; Parker originated the title canine in the 1995 Off-Broadway premiere, and Tony winner Broderick led a 2015 Broadway production alongside Annaleigh Ashford.

Broderick is no stranger to Simon’s work, earning his first of two Tony Awards for the late playwright’s Brighton Beach Memoirs before going on to star in its sequel, Biloxi Blues, as well as a revival of The Odd Couple with his The Producers co-star Nathan Lane. This will mark the first Broadway production of a Simon play since his death at the age of 91 last year.

Plaza Suite, about three couples taking up a suite in the famed New York City hotel, marks Tony winner Hickey’s Broadway directorial debut, as well as his second play in the 2019–2020 season. This fall, the actor will star in Matthew Lopez’s The Inheritance, reprising his performance from the two-part play’s London premiere. He will take a brief hiatus from the play in the spring as Plaza Suite enters rehearsals and subsequently return to the Lopez drama.

The creative Ambassador Theatre Group, which operates both the Colonial and the Hudson, will produce, alongside Gavin Kalin Productions and Hal Luftig.