Zeller’s The Son Transfers To The West End 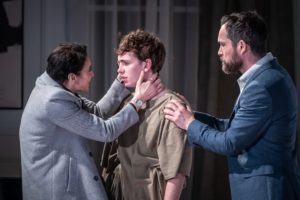 Kiln Theatre ’s production of The Son is set to transfer to the West End this year.

Florian Zeller’s play, translated by Christopher Hampton, will open at the Duke of York’s Theatre on September 2.

The Son follows a family in the midst of a breakdown and a teenage son who skips school, lies and grows ever more distant. The Standard’s Henry Hitchings called the production “a clear-sighted look at the pain and turbulence of mental health disorders”, praising Abbington and Light’s “sensitive” performances.

Longhurst’s production will have sound and composition by Isobel Waller-Bridge, design by Lizzie Clachan and lighting by Lee Curran.

It is the final part in a trilogy of plays by Zeller, following Olivier Award-winning The Father and The Mother, both of which ran at the Tricycle.

The Son runs at Duke of York’s Theatre from September 2-November 2, with previews from August 24, thesonwestend.com

The Son is produced in the West End by Fiery Angel and Gavin Kalin Productions.